Do you believe in the paranormal…

Posted on November 1, 2016 by smithposts

Are you serious about the paranormal or a curious nonbeliever with a sense of adventure?  Last Saturday night, just prior to Halloween, when downtown Knoxville was filled with 100’s of ghosts and zombies and a flash mob may or may not have broken out in the Thriller zombie dance, we joined 20 others on a Haunted Knoxville Ghost Tour to learn about the Knoxville paranormal scene.While John and I maybe curious non believers we were open, even hopeful to the possibility that the spirits of Halloween might play hide and seek with the legends in our city.

Our Haunted Knoxville Ghost Tour was led by J-Adam Smith, a bonifide paranormal investigator who has appeared on Paranormal Television and has participated in a number of investigations in Knoxville and other parts of the country. He is a gregarious, animated and quite knowledgable on the topic of the paranormal in Knoxville.  He is also passionate about his topic. 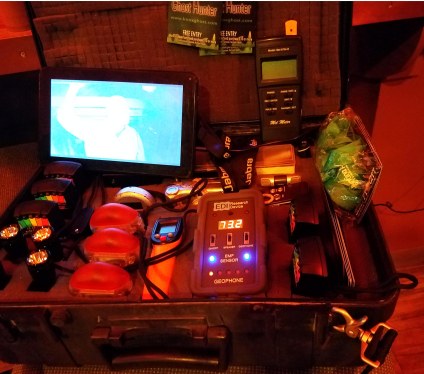 As per pre-arrival instructions, participants began to gather in the Market House Cafe on the northern corner of Knoxville’s famed Market Square around 7:15 PM.  J-Adam stood near a table with an open brief case filled with beeping and blinking gadgets, paranormal equipment we later learned.  He greeted each participant with a warm welcome and a Haunted Knoxville Ghost Tours lanyard. As we slipped the lanyards around our necks, we fell into the world of the paranormal for the next few hours. 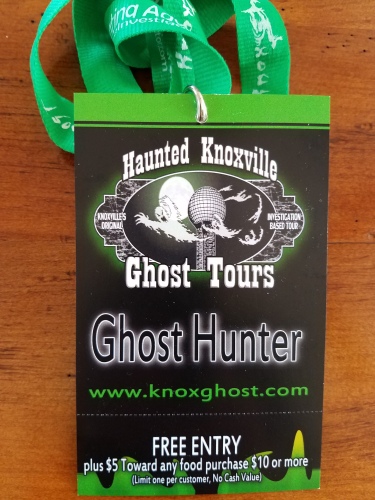 J-Adam began the adventure promptly at 7:30 PM, leading us to the alley behind Urban Outfitters, which we learned was the original site of the 2nd Presbyterian Church and graveyard. Those who wanted to participate in the hunt for ghosts or spirits were equipped with paranormal tools including ghost meters, hand held flash lights, EMF meters (electromagnetic field) and a spirit box. J-Adam explained the nuances of each tool.  I liked the lights and bleeps of the ghost meter so I took one of these. John, ever practical, decided to be an observer. 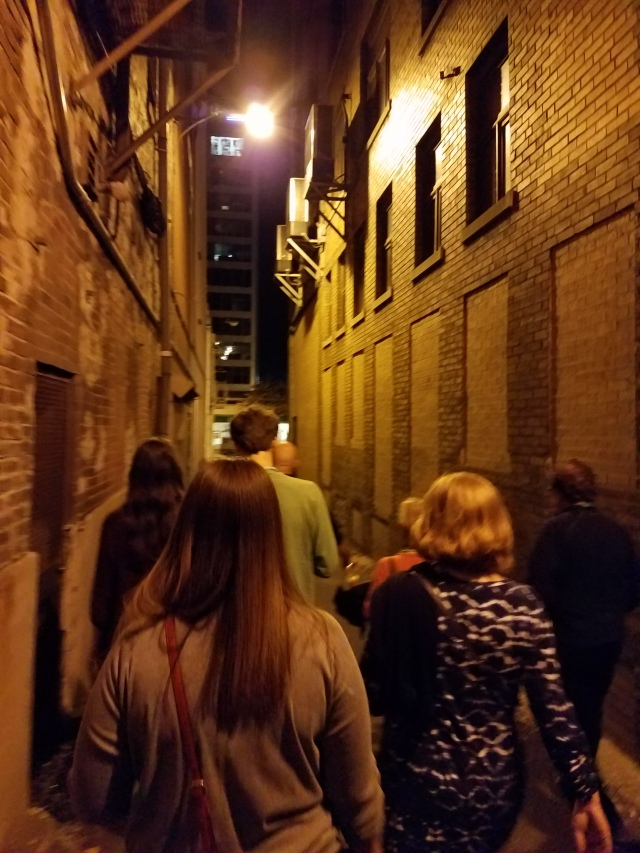 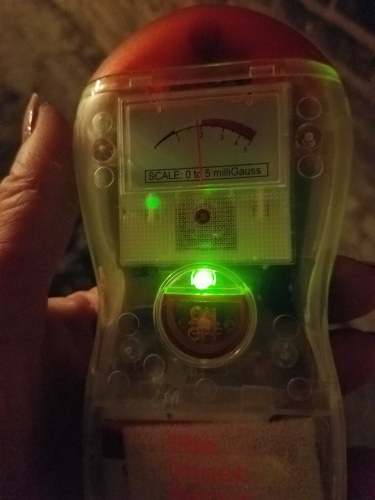 We quickly discovered that about 1/3 of our group not only knew all  the answers to J-Adam’s questions but were dead serious about the paranormal. As we moved from site to site, this group worked with the equipment, talked to the spirits and kept those of us on the fringes totally engaged. We stopped at sites of long gone funeral homes and graveyards (currently known as back alleys and empty spaces), The Bijou Theater (Lamar House), Knoxville Historial Society (ex-post office-federal court house) and the the 1st Presbyterian Church cemetary.  The history was fascinating, the spirit hunting was entertaining and we thought J-Adam Smith was a super guide. The tour lasted for 3 hours,  a value for the ticket price of  $30/per person. 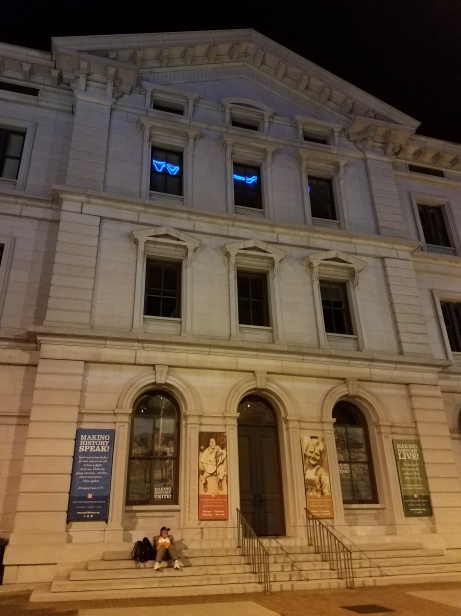 East Tennessee History Building once home to federal courts and post office.  According to J-Adam, it is also the site of possible ghost activity 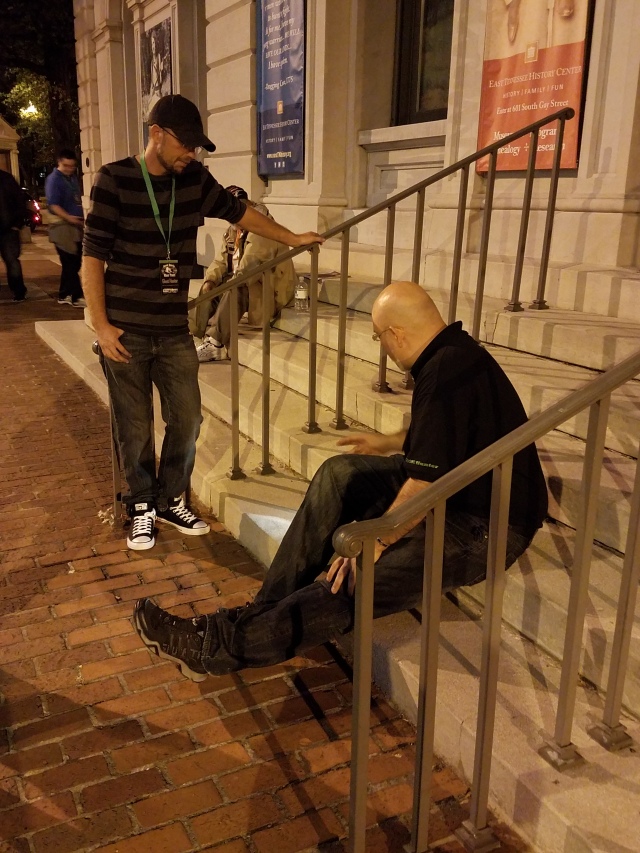 Our guide,  J-Adam Smith (seated), explaining the details on flashlight use in ghost hunting 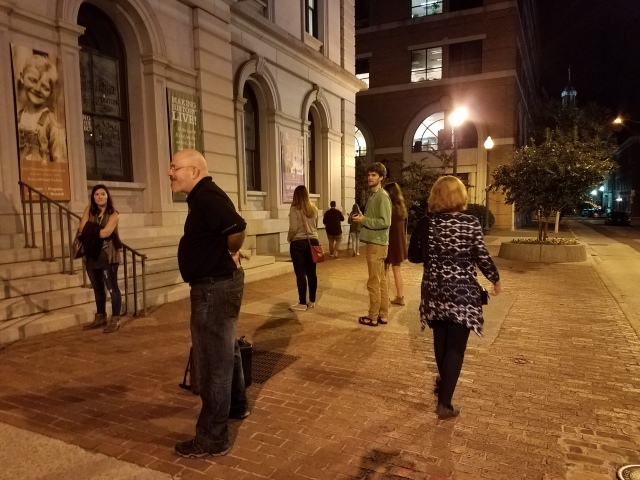 Tour participants on the hunt for spirits 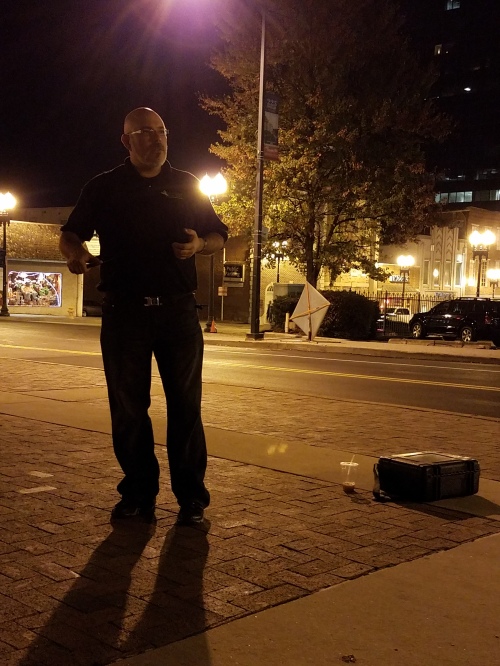 An empty lot on the corner of Church Avenue and Gay Street which, back in the 1800’s, was the site of a funeral home.  Do ghosts from the funeral home haunt here?  Just ask J-Adam why such a valuable piece of property sits mostly empty with a only a sculpture to occupy the space 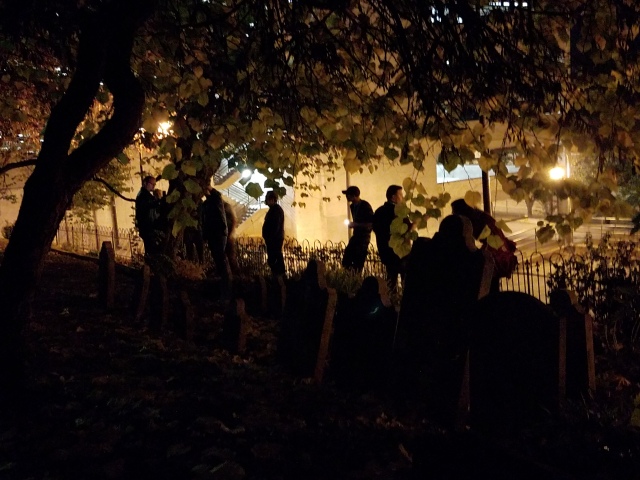 So, did we see any ghosts or hear any spirits?  No, not unles you count a couple of fluttering flashlights and a possible “orb” on someone’s photo. But we learned something about history and the paranormal and we had a really great time and that was worth the time and money spent for the tour! 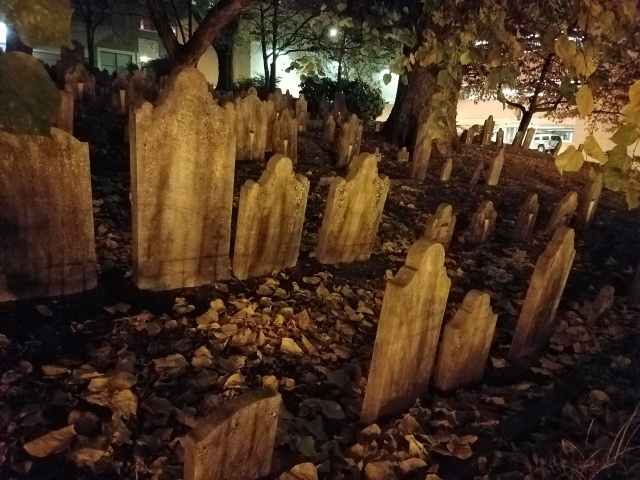 1 Response to Do you believe in the paranormal…