Roaming in the Roans…

Mountains are the beginning and end of all natural scenery.   John Ruskin

I think the balds of the Roan Highlands are about the most beautiful place I have ever hiked. Located in the Unaka Mountain Range in Upper East Tennessee, the balds make up the longest section (7 miles) of grassy balds in the Appalachian Mountains.  All but one of the balds is located on the Appalachian Trail (AT).

For the weekend hiker, the AT section of trail to Grassy Ridge Bald begins at Carvers Gap, just on the border of Tennessee and North Carolina. For the AT thru hiker, the trail begins some 378 miles south at Springer Mtn, GA. There were a lot of day hikers and backpackers the weekend we hiked the balds.

Late on Friday night, after yet another week of sweltering temperatures in the valley, we decided to escape the city heat and head high into the high mountains for an overnight on Grassy Ridge Bald. We choose Grassy Ridge for several reasons: 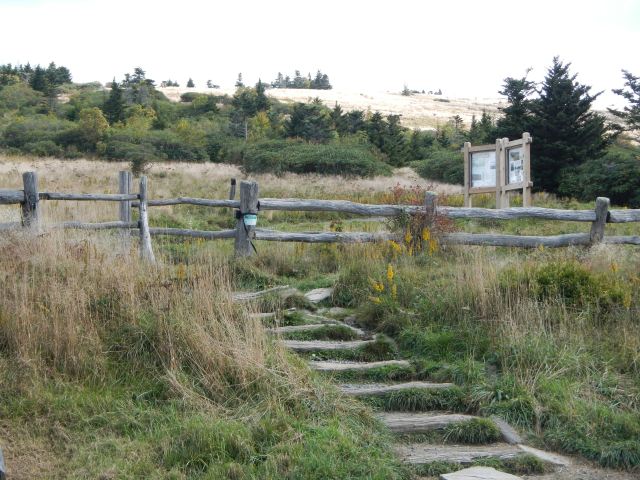 The AT section leading to the Balds of the Roan Highlands, begins with 8 log steps which lead to an opening in the log fence, then an ascent through a small spruce forest and up to the top of the 1st bald, Round Bald.  The ascent is not too demanding and most of the trail surface is packed gravel. It is no surprise that many day hikers stop at Round Bald.

Grasses near the top of Round Bald

Dayhikers at the top of Round Bald. 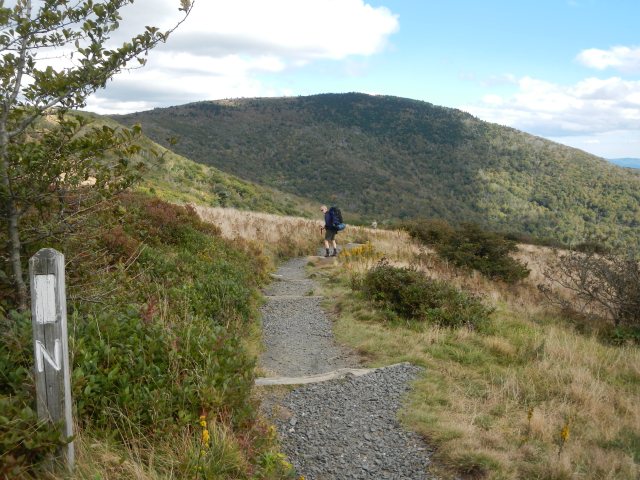 John hiking down the backside of Round Bald, Jane Bald lies ahead of him. Notice the AT sign post on the left of the photo indicating we are headed north on the AT. On the backside of the sign is a southward marker. From Georgia to Maine, the AT is marked with a “white” blaze.

Didn’t I say, the views are spectacular??

We are now looking back toward Round Bald, which is in the foreground with the AT winding up the bald in the left of the photo. Roan Mountain is the tallest mountain behind Round Bald with Carvers Gap in the center between the two. The photo is from Jane Bald.

Jane Bald is the 2nd of the 6 balds that make up the Roan Highlands. The trail (still on the AT) that climbs Jane is a little rougher and rockier than Round Bald.  At the top of Jane Bald, the AT splits to the left and continues over Yellow Mountain, Little Hump and Big Hump (each one equally beautiful) as it heads north toward Mt. Katahdin, Maine some 1810 miles away.

Since our destination was Grassy Ridge Bald, we forked to the right and followed an unmarked spur trail climbing up a rutted, rocky trail through rhododendren thickets.  The Roan Highlands are known for their spectacular display of rhododedren blooms around the 3rd week of June.

Hiker climbing to the top of Grassy Ridge Bald.  Jane Bald,  Round Bald and Roan Mountain are visible behind the hiker. 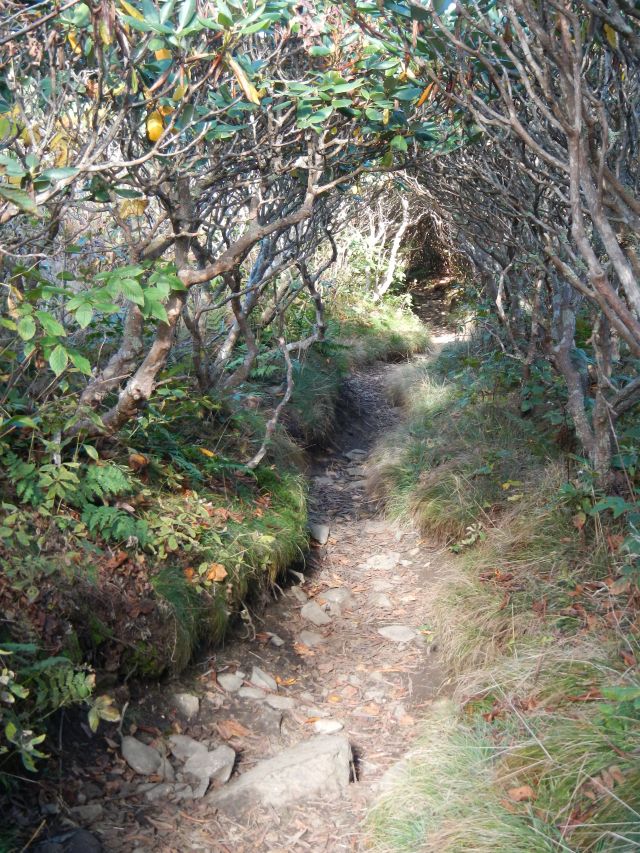 A dense rhododendren forest arches over a secton of the trail near the top of Grassy Ridge Bald. 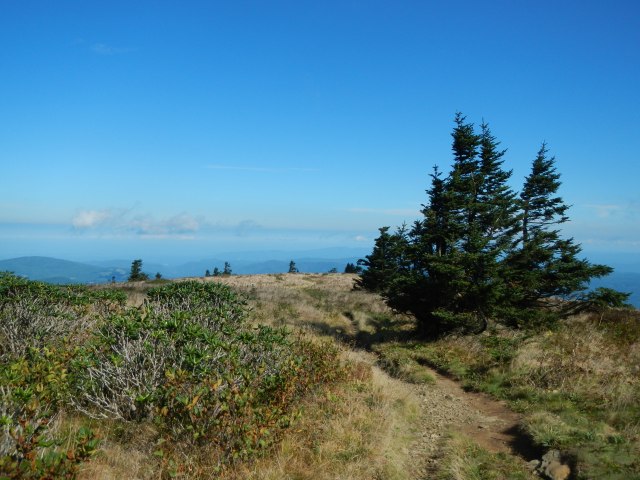 Up and over the top of Grassy Ridge Bald

Based on the number of cars in the parking lot at Carver’s Gap and foot traffic on the trail, we were not surprised to find the best tent sites on Grassy Ridge Bald taken.  We crossed over Grassy Ridge and dropped down into a gap (our usual camping spot) only to find a tent set up in the middle of the gap.  While technically there was still space for  a second tent, we continued up the other side to a rhododendren garden with rocky outcrops.

John begins the tent set up for what we though was the perfect campsite.  As it turns out, we bypassed testing on the ground cloth to see if the site was flat and later discovered that the middle of the tent was in a bit of “impression” in the ground. 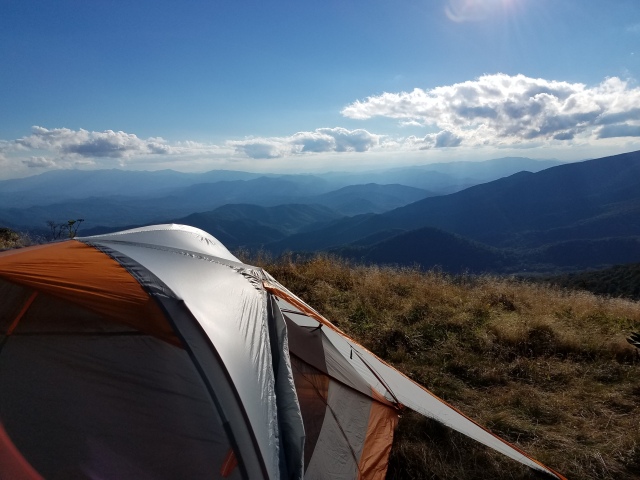 Incredible view from our tent!

Our tent is nestled against a rhododendren thicket which provides protection from wind that often roars up the side of the mountain and across the balds.

We were treated to a spectacular sunset.

Both of us were happy to see the sunrise, it had been a restless night on the uneven ground.  Besides, we always look forward to coffee and the best cup is the one sipped in the great outdoors. 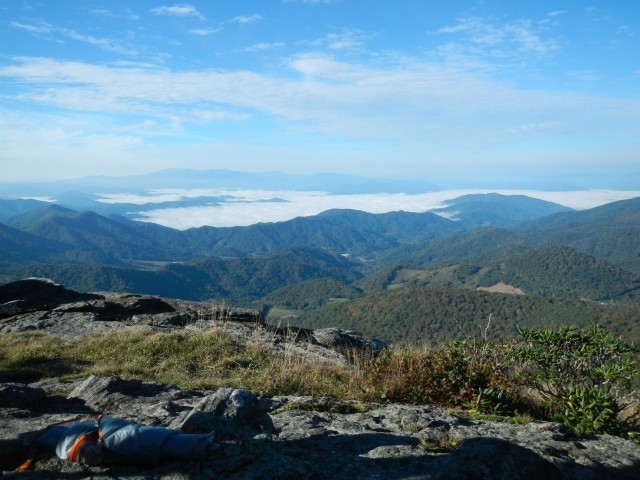 We watched clouds gather in the valley as we sipped coffee on our rock outcropping some 6000′ above the valley floor.  It was a beautiful  morning.

Morning light in the mountains.

After an hour or so of  cloud watching and packing, we hiked out the same way we came in. It had been a great 24 hours in one of our favorite areas and our 78th backpack was in the books.

The trailhead at Carver’s Gap and parking are located about 25 minutes from Elizabethon, Tennessee off Highway 19E. From 19E take  Hwy 143 to Carver’s Gap.  At the base of the mountains, on Hwy 143 is one of Tennessee’s 56 State Parks, Roan Mountain State Park .  A visitors center is located on the main road where maps and information can be obtained. Hiking and camping in the Roan Highlands is free.

1 Response to Roaming in the Roans…