I am lucky,  the most visited national park in the United States, the Great Smoky Mountains National Park, is in my backyard! The Smokies is a four seasons playground. If you want to hike, bicycle, backpack, camp, picnic, float, take a trip back in history or just take an afternoon drive to see some incredible views, the Smokies has it all!

On a particular Saturday in late January when we were predicted to get snow in the valley, but of course didn’t, we decided to head to the mountains to have a snow experience. 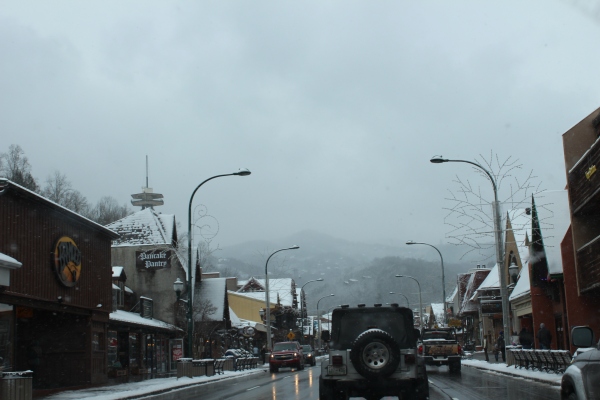 Snow fall was light as we drove through Gatlinburg, a quaint mountain town just outside the main TN entrance to the park. Clouds hung low in the foothills and everything was wet and gray.  We were surprised and happy to find light traffic on the parkway, it is usually bumper to bumper.  It appeared the predictions of snow kept many people at home.

Once inside the park, the road became dicey. Snow was packed along the roadside and large patches of ice were visible.  We were passed by a convoy of salt trucks and scrapers as we pulled into a parking lot at the Park Headquarters. Luckily we had planned to hike a trail directly across from the headquarters building because every road in the park was closed due to ice and snow!

Here we are in the Park Headquarters parking lot.  I am wearing 4 layers for warmth!!  I don’t usually wear a hat when exercising (or anytime really) because I have a thick head of hair that keeps me pretty warm.  Note the amount of snow at headquarters level, about 1500′.

Our plan was to hike on the Old Sugarlands Trail until we were ready to turn around.  We have hiked this trail many times in the winter because it is easily accessible and provides great scenery.  The trail begins gently along the West Prong of the Little Pigeon River.  Beautiful! 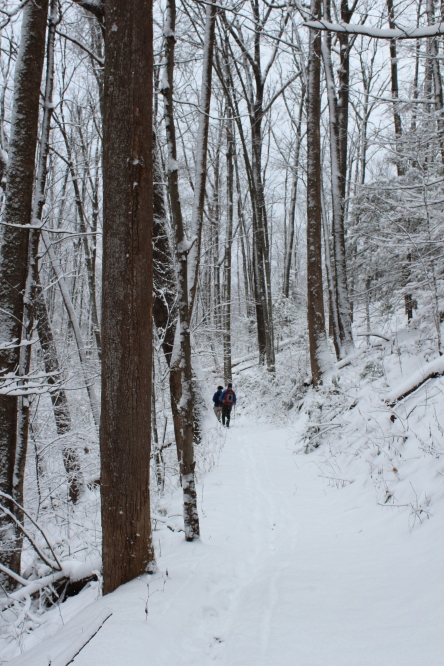 The trail climbs up and way from the river quickly and becomes narrow and steep.  The higher the climb the deeper the snow!  It was magical!  I haven’t been hiking much since Alaska so I was dragging behind Lee (John’s son, who joined us on the adventure) and John. I kept telling myself that it is hard to keep up with a long legged 26 year old but it was a reminder that I am out of hiking shape!

The temperature remained well below freezing and the sun never came out, a blessing and a curse.  At least the snow laden branches did not dump their loads on our heads and down our jackets! 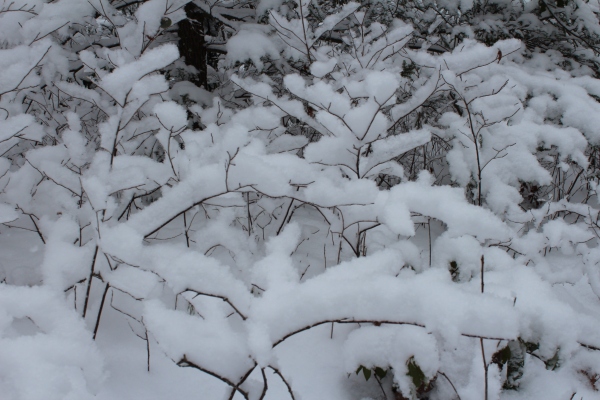 We climbed to about 2200′ before our turn around.  Our total hike was roughly 5.5 miles (yea, I know, that is not a “rough” number). With its shadows and vegetation,  dusk comes earlier in the mountains than in the valley so we watched our time carefully and turned around with plenty of time to get back to the car.

We stopped for dinner on the way home at one of the steakhouses in our least favorite tourist town, Pigeon Forge.  It was a pretty unmemorable meal bur we were oh so hungry. So why is it that the cold seems to increase one’s appetite 10 fold?  During our post hike quarterbacking, we made promises to get out again in the next few weeks. Maybe in March…