Summer has arrived down south, just a little early for my taste.  With it’s arrival comes summer’s evil henchmen, heat and humidity. But also the sweet scents of magnolia, mimosa and honeysuckle which are currently heavy in the air.  A light breeze or a spot of shade can make a suffocating  afternoon almost bearable.

Southern summers are a challenge to me, my motivation wains and I struggle with running.  I am a winter girl at heart but I do my best to get through. With that said, we had a good weekend, quiet and uncomplicated.  But my runs, well not so much…

Saturday morning was reserved for my long run.  With my eyes on a November marathon, this was my day to determine if the goal was feasible.  My father’s death and sister’s move have altered my spring training schedule. In late March, early April, I had been at 7 miles but fell back, for more than several weeks.  Originally last weekend was to be my drop dead date for reaching 8 miles but I didn’t make it and wasn’t ready to let go of the dream, so I delayed the decision for one more weekend.

I went into the weekend very tired so I admit, I woke up about 2 hours later than I should and once up, I convinced myself that relaxing with a couple of cups of coffee was a good idea (bad idea by the way).   So while I was on the road by 10:00 am, the temperature had already reached mid-80’s and the sun was relentless.  John, who is not as heat sensitive as me was running along beside me chattering about work, the neighborhood etc.  Meanwhile, I was struggling.  The first few miles  were completed at my usual slow “summer” pace but around mile 2.5, I started getting in real trouble.

I started a walk-run routine which is never a good idea for me.  Once I slow to a walk, my brain goes in “finished” mode and I have a hard time restarting.  John, who has been so supportive of my marathon goal was willing me on but realized I was in trouble ran to the house for water and the car so he could get back faster than by foot.

Once re-hydrated, he urged me on. I slowly started running again. “I’ll drive down the street and you run to me,” he says.  Good plan in theory but not so much for this day. He drove less than a mile down the road, parked a shady spot (under the bridge in the above pic) and started running back to me. He ended up running further than he expected before I finally came into his view.  He called out encouragement but I was walking and in tears.  The blubbering “I can’t do this” began.  Boy do I hate summer running!  I ended up getting home by car, the “drive of shame 🙂 ”  Lucky for me, after an hour or so in air conditioning, I convinced myself to give it another go on Sunday.  Done: 4.5 miles

Geez!  We had plans to drive to Pigeon Forge (one of two so called resort towns at the foot of the Great Smoky Mountains National Park) for the evening to do some outlet shopping that we had been putting off but first we had to check dinner off our list. We were hungry! We decided to eat downtown (about 2.5 miles from the house) so we wouldn’t end up waiting hours for a table in almost any restaurant in P.F. due to the tourist traffic.

I enjoyed pulled chicken, pinto beans and a non creamy coleslaw.  Actually not too unhealthy compared to the mac and cheese that I really wanted!

The rain was not slacking up outside

But linger as we tried, if we were going to get our shopping done, it was time to go.

So off we went to Pigeon Forge via Sevierville, home of country star Dolly Parton.  Dolly has done a lot for this little town of hers (and the very nearby town of Pigeon Forge) including buying the old “Silver Dollar City” and turning it into an amazing amusement park called Dollywood.  Unfotunately, much of what has grown up around Dollywood is chain restaurants, motels and outlet malls.  Sevierville (below) remains a somewhat quaint town though things are changing fast. 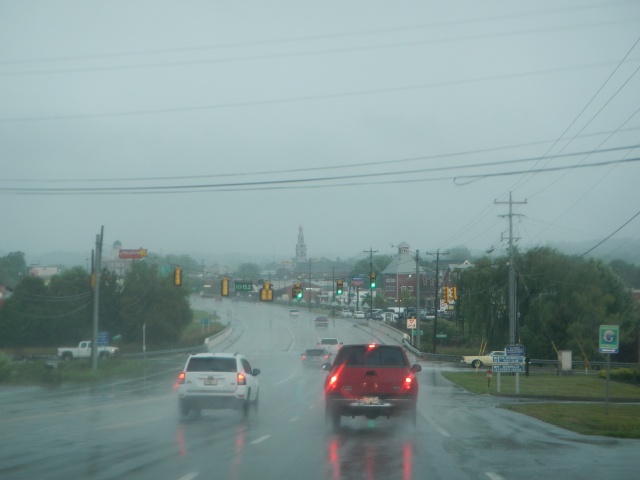 Sevierville in the rain

Driving into Sevierville, usually means a great view but Saturday it was shrouded in clouds and rain.  The outskirts of Sevierville overflows into Pigeon Forge (below) where the foothills of the Great Smoky Mountains National Park become visible (again that rain and fog are obscuring). Traffic in Pigeon Forge is legendary.   On this particular evening, it wasn’t too bad. 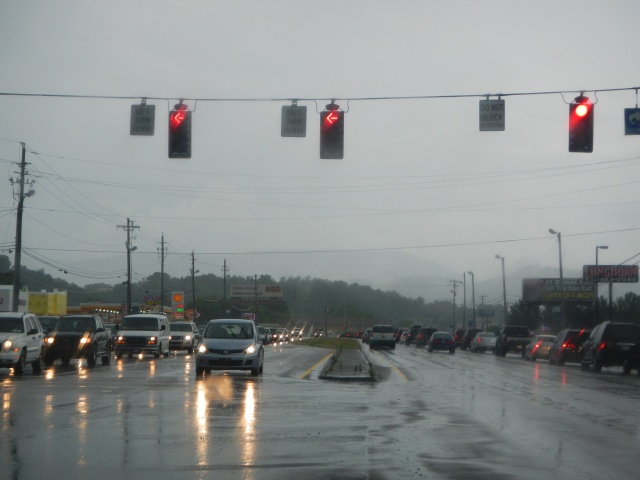 We got our shopping done and were happy to be home to clearing skies.

Sunday morning, we went out for a run again, this time a couple of hours earlier.  The run was not easy but the sun stayed behind clouds so it was not unbearable. I still had 8 miles in my mind but was very grateful for 7.  John and I talked a lot in the 24 hours leading up to the run, about my ability to train during the summer, life’s stresses from the spring and what else we might do if I was not training for a marathon.

You see, back in very early March, my application to run in the NY Marathon was accepted.  I have dreamed of running the NY Marathon long before I began running.  I have so many memories of standing on the street corner of 7th Ave and 53rd Street on a November Sunday morning cheering racers on (I use to travel to NY for work). I wanted to be part of that!  And when I was accepted, I was so excited, what an amazing opportunity!  I am fully aware that at 63, my opportunity to run a marathon is waning so it is with much regret (and some relief) that I have decided to defer the run for another year.

John and I have decided to keep working on running this year, building mileage, getting stronger and possibly even entering some races of different mileage.  I haven’t given up on me and the marathon but I am putting it to rest for now.  I need to step back, deal with my emotionally difficult spring and come back stronger.

I spent my Sunday afternoon in the yard searching for interesting greenry and making small arrangements.  I enjoy finding bits of things in the yard and making arrangements. Post run seemed to offer up some time to relax and arrange.  I started with one vase using left over birthday flowers and just couldn’t stop.  It was a nice way to spend the afternoon… 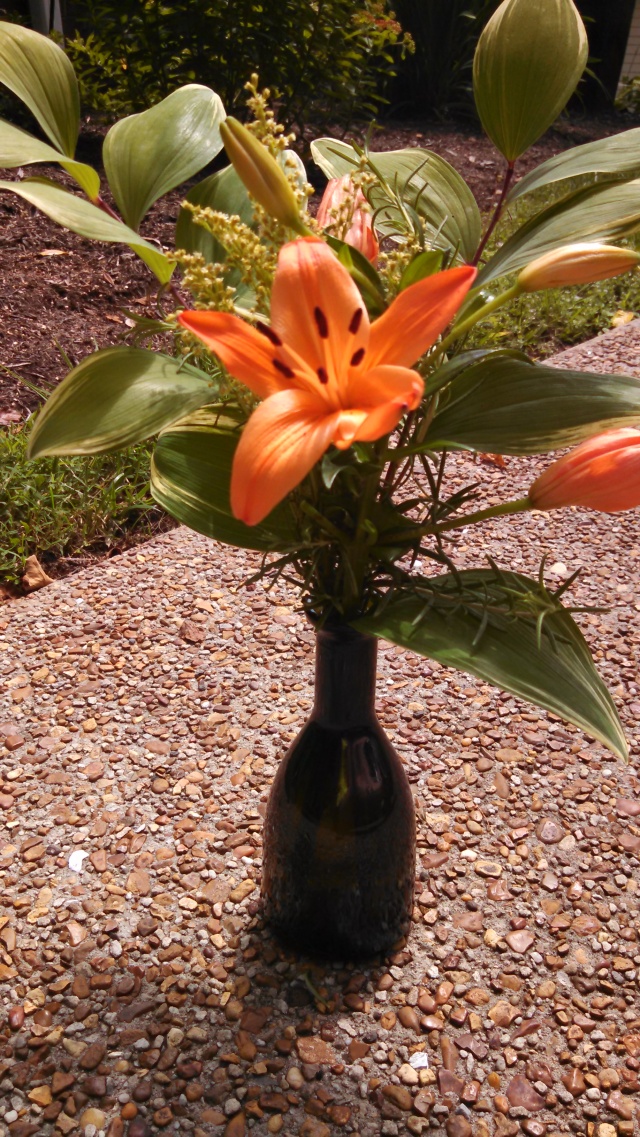 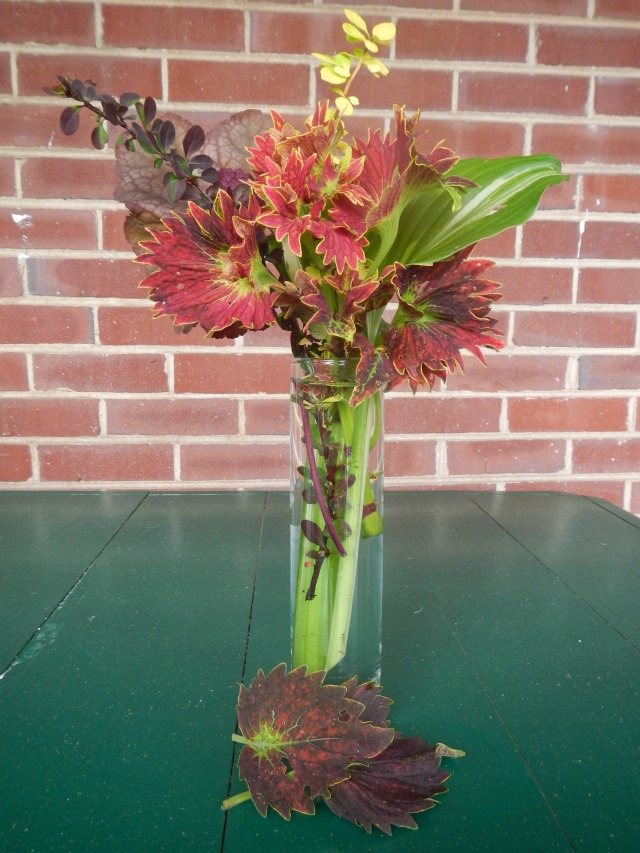 Coral bells flowers and leaves, variegated hosta, rosemary and red tipped photinia.  The painting is one in a series of fish my father painted a number of years ago. 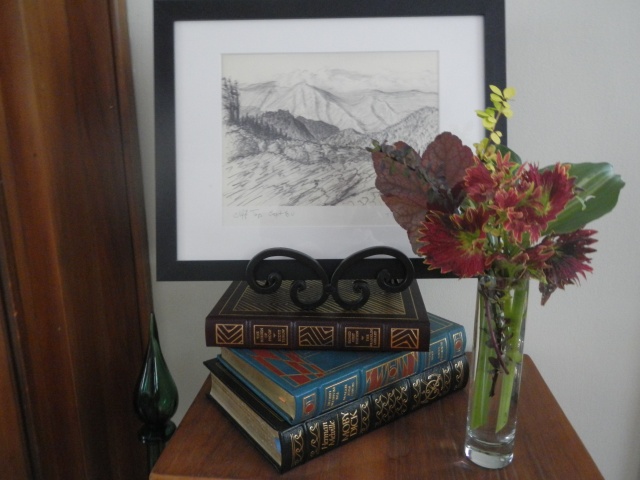 The tall arrangement from above (my favorite) next to a pencil drawing of the Great Smoky Mountains National Park, again, by my father.