As I write this, severe storm warnings are flashing on my TV and phone.  Lightening is flashing every minute or so and the low steady rumble of thunder vibrates the house.  The power of nature is amazing and scary at the same time!  As a cold front moves in from the north, we are experiencing intense spring storms in the middle of summer.

Yesterday, Saturday, was a big day on my exercise planner.  I woke up a little later than I thought I would and lingered a little too long on the porch drinking coffee with John.  The sun was rising quickly when I finally laced up my shoes and got on the road.

My  plan was to run 8.0-miles and I did. I was tired and did not want to get too far from home so I stuck mostly with neighborhood roads and a section of greenway. I avoided the biggest hills and picked up a few medium hills.  It was not an easy run for me.  The temperature held in the 70’s and the humidity was high.  I ran on Friday instead of resting and I paid for it during the last 3 miles of the run.

Post run recovery water on the left, collapsed (and sucked dry) run bottle on the right!

I carry a water bottle when I run more than 5 miles, especially during the summer.  The idea of hiding water bottles before hand then circling backing (in a car of course) and collecting them does not appeal to me.  I may change my mind as I continue to increase my mileage but right now this system works for me.

Sweaty and salty, yuck!  No glam running look on this girl. 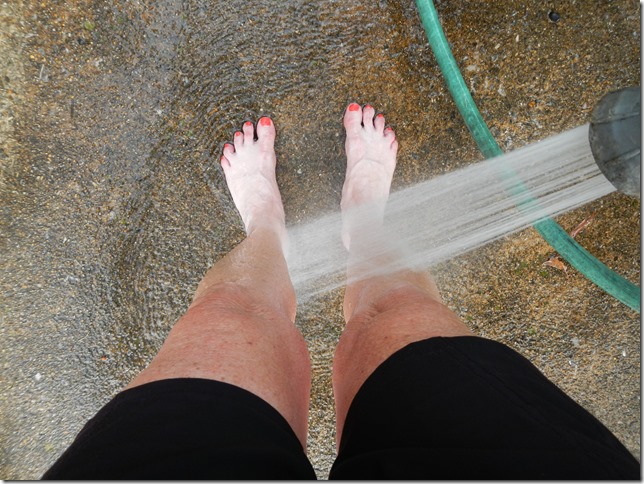 My legs were screaming so a cold water shower was in order, also a little Vitamin I

Of course when watering one’s legs, the plants appreciate a little nod too!

Post run, I made a few “notes to self” for the next long run:

Late Saturday afternoon, John and his son, Lee decided to go bicycling. Bicycling wasn’t really in my plan until today but it was a nice rolling loop road with numerous turn around points so I figured what the heck, I would go ahead and get the bicycle out of the way.  After all, I could bail anytime… Right?

I pumped out only 12.5 miles, a few miles short of the 15 miles planned for the weekend.   Some parts of the ride were good, some were pretty crummy. I had not realized just how tired I was.

Three bikes crammed on a two bike rack, we held our breath but it worked ok

Yes we did!  After the ride we headed to Sonic for drinks and junk food.  I was a good girl, mostly. I had a diet cherry limeade.  We won’t talk about the stop at Buddy’s BBQ, the order of six hush puppies and just how good they were. No, we won’t talk about that.

Home, showers and I was walking on tender feet.  John is looking for a computer so we headed out to Best Buy to window shop. An hour later, decision still unmade and I was still incredibly hungry so we stopped at Zoe’s on the way home (about 8:30 PM) for a Greek Salad and humus plate.  Yep, the fourth meal! 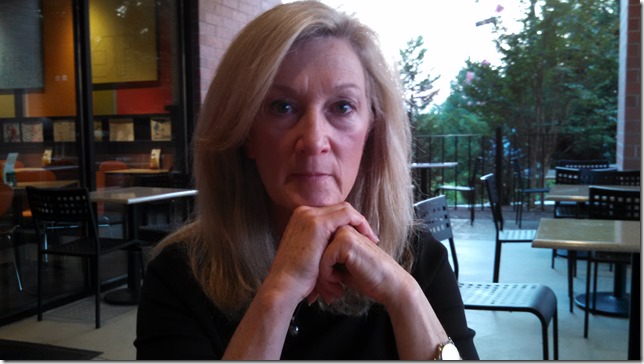 One tired girl, ready to go home and sleep!

Finally 30,071 steps since I first stepped out of bed, it was time to get back in bed.

Hope you had a great Saturday, whatever you chose to do!  Thanks for reading.

This entry was posted in Bicycling, Outside, Running, Weekend. Bookmark the permalink.