Posts from the Weekend…

My husband and I spend a lot of time in motion, running, bicycling, hiking, walking.  Sometimes it makes for an interesting weekend, sometimes repeating the same running route results in a satisfying but very uneventful weekend.  Such was the case of this past weekend.

Saturday morning was a sleep late, coffee on the porch,  and run kind of day.  I ran while my husband, with his 6’+ frame and long stride, followed not too far behind.  Based on his walking goals, I chose the hilly route and surprised myself (and him) by running several hills that in the past months I would have walked.  Small successes like this keep me motivated.

It began to rain halfway through the run, a hard, pelting rain.  We had no choice but to keep going and finally arrived home soaking wet.  The rain stuck around until mid afternoon when the sun came out, the wind kicked up and we ventured back for some much craved Chewy’s fish tacos on their outdoor patio.  Great afternoon!

Then sleep and repeat on Sunday.  First up was a 4 mile run.   I had not planned to run hills on Sunday but again my husband was following close behind so I chose another hilly course.  I struggled with the first couple of miles as my legs were tired from the previous day but I pushed through and finished the run feeling good.  Again, another success that have me searching race possibilities in the fall.

Next up was a bicycle ride.  It was a short ride, about 14 miles, around our neighborhood,  downtown and out along the river.  I took a few pictures along the way, to share.  Hope you enjoy the bright sunny day in Knoxville:

Our city roads are well marked for bicycling, I just wish our drivers were more courteous.

Downtown waterfront is becoming a popular area to paddleboard and kayak (both on my list for this summer).

Sunsphere at the World’s Fair Park. 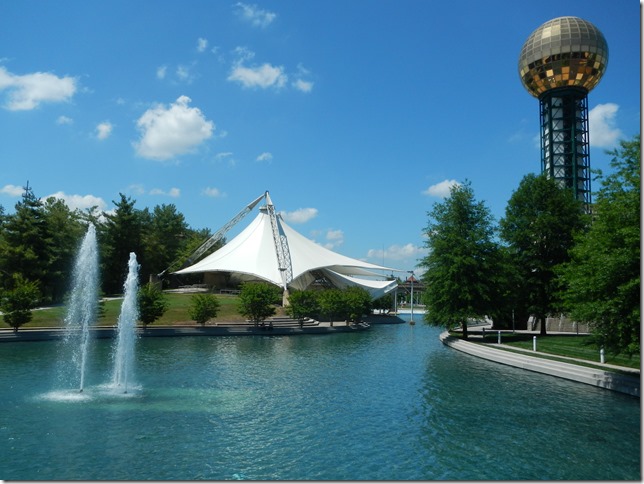 Hope you had an sunny, active weekend.  Thanks for reading!

This entry was posted in Bicycling, Running, Weekend. Bookmark the permalink.