We went to the Big South Fork National River and Recreation Area a couple of months ago to backpack with a group from our local Sierra Club. It was my 80th backpack. Not a bad number  for backpacking for 20 years but somehow I had expected to be over 100 by now.  Life has managed to get in the way.

The 125,000 acres that comprise the Big South Fork National River and Recreation Area (BSFNRRA) are located on the Cumberland Plateau between middle Tennessee and middle Kentucky. It is a beautiful area, rich in geographically significant rock formations, specifically natural bridges. BSFNRRA has one of the highest concentrations of natural bridges in the eastern US.  Protecting the area was the dream of Tennessee Senator Howard Baker, Jr (of Watergate fame) who was from Huntsville, TN, a small town about 25 miles from what is now the park boundary. With Senator Baker as the legislation cosponsor and shepherd, the bill to create the BSFNRRA was signed into law by President Nixon on March 7, 1974.

Our adventure began on Saturday morning at the group leader’s house (Will Skelton) where 11 of us gathered with our assorted gear and divided into 4 cars for the nearly 2 hour drive roughly north-west of Knoxville.  We left early by our standards (8:00 AM) for a short 4 mile hike but Will had a detour in mind, the “Double Arches” natural bridge. 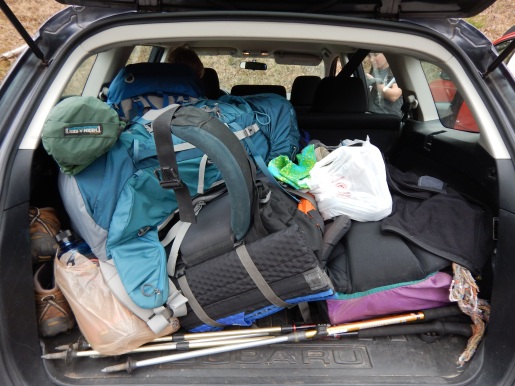 The Double Arches are found on 16.7 acres of land purchased in 2015 by The Nature’s Conservancy. The arches are estimated to have formed about 300 million years ago. The property is bordered on two side by the BSFNRRA. Unfortunately, it is boardered on the entry side by a private horse club who gave us a bit of a tongue lashing for parking on “their” property. Hopely a different entrance will be developed easements will be obtained, meanwhile, don’t get me started on the damage horses to do trails…

We drove an hour or so out of our way to see the arches but it was worth it.  The hike in was an easy 1.9-miles out and back.

The Double Arches, one high, one angled below.  Note the tree growing in the back right of the photo.

Here is the tree.  It has bent and adapted to the rock which is in its growth trajectory. And oh the initials, “fools names and fools faces” as my Dad use to quote.

Now it was off to the main event of the day, the backpack.  After an unusally long car shuttle (another reason to leave Knoxville early), we hit the trail toward Leatherwood Bridge, located 7.5 miles from the trailhead. This trail section was recently completed and connects the Honey Creek Loop with the John Muir Trail via Devil’s Den and the O & Bridge. Our plan for the day?  Hike approximately 4.4 miles and set up camp on the plateau above the Big South Fork River gorge.  That shouldn’t be too tough, right?!

Based on our dress, the weather was obviously cool and the sky was overcast.  Driving into the BSFNRRA, we were mostly in low clouds which often left water droplets on the car window.  John is in front with the blue jacket, Will in the orange vest to the right.

Yep, 7.5 miles to the shuttle cars.  The shuttle drive took 40 minutes or longer….

The hike was “a bit more” difficult than billed and due to the spring rain, the creeks were running higher than expected.  Unfortunately, I have a life long fear of water crossings  where balancing on rocks and/or logs is required, I attribute this to many instances of loosing my balance and falling into mountain streams as a kid .

At the first significant  water crossing, it took me about 1/2 second to realize that leaving my water shoes in the car was a bad idea.  I suffered a minor panic attach, something I am not plagued with in my “regular” life (and not usually on backpacks). After a few minutes of fretting, I took my boots off, tied them around my neck and stuffed my socks in my boots.  I plunged my bare feet into the ice-cold water and started across. The water felt swift and the rocks were slick.  John finally talked me through the crossing with some encouragement from the rest of the group.  The rest of the water crossings were painless, but the discomfort from the first one lingered with me.

The first of a number of small and large waterfalls. 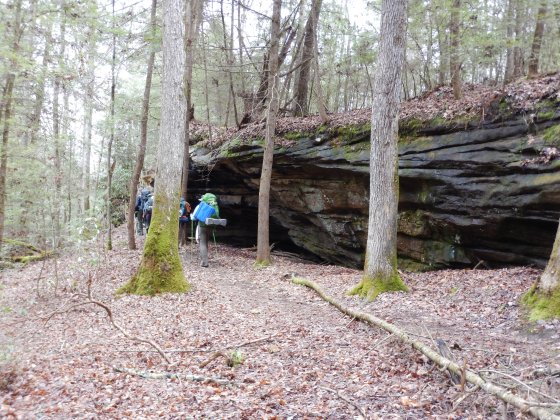 No way to climb this rock formation except grab the rope and pull ones self up.  This is John taking his turn.

A beautiful winding rock trail lined in moss. The trail actually overhangs the rock formation below.

This little fall would either be a dribble or would not exist without the spring rain.  Based on the fire ring, this cozy site has been used for a camp.

The rock formations are massive.  For perspective, my husband, who is in the front of the picture is 6’2″.

A good hike in the BSFRRA is not complete without a rock squeeze and we were not disappointed.  This one involved scrambling up a boulder on one’s knees (the guy in the tan pants is in climb mode), swinging one’s feet around in front and sliding down the other side, all while keeping one’s backpack from hitting the rocks and throwing one out of position. 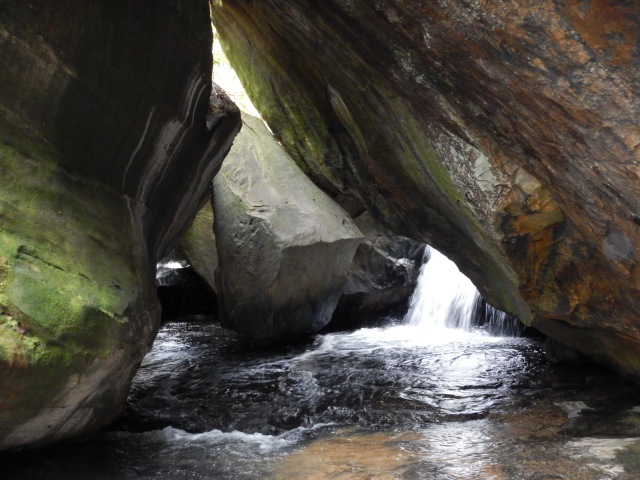 Just on the other side of the rock squeeze is this hidden waterfall. Spectacular!

A beautiful red rock wall striated with moisture escaping from the saturated ground above.

Camp is always a welcome sight, a time put down one’s pack for a while, relax, eat, spend time with friends and refresh for the next day’s effort.  Our camp was a lightly forested area with space for many tents.  We needed the space, we had 9 tents.  A wooden picnic table served as a food prep area and, as we were early in the backpacking season, we found an abundance of downed wood for a campfire. A pleasant (but cool) evening ws spent around the campfire telling stories and having a great time.

Home for the night, our little REI tent.

A foggy morning broke all too soon (although at 63, sleeping on a thermarest and climbing out of a tent is not getting any easier ).  As the sun came up, hundreds of magnificent snow white spider webs covered in tiny water droplets were revealed to be scattered  across the forest floor.  It was a magical start to the day.

We were in no particular hurry to leave camp, I believe we pulled out around 9:00 AM.  We headed off the plateau and down a steep slope toward the O & W Bridge which extends across the expansive Big South Fork River. 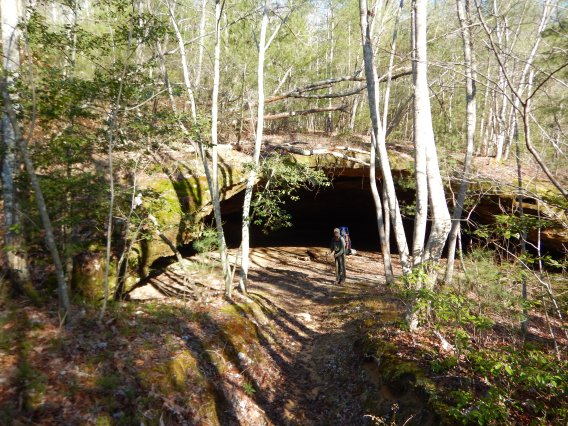 From camp we hiked about .25 mile, crossed over our water source, a shallow, fast running creek and came across this fabulous rock house, Devils Den Rock House.

Devils Den from the inside out.  It is an interesting rock house in that it is not part of a cliff face but is a stand alone structure. 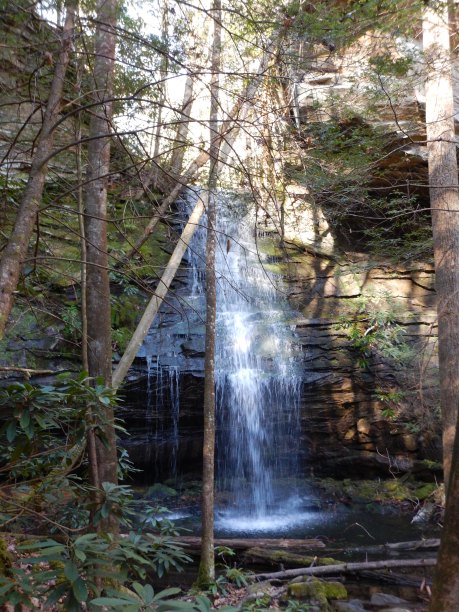 Just below the rock house is this impressive waterfall.  The volume of water is likely higher than normal due to recent rains.

Finally we reached the O & W Railroad Bridge which has been turned into a car and pedestrian bridge.  The  bridge has been undergoing massive repairs and was just opened to foot traffic the day before our trip.  It is not yet open to cars. 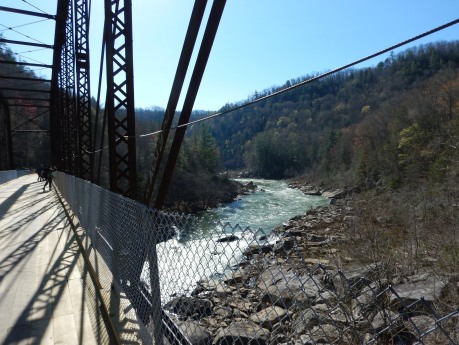 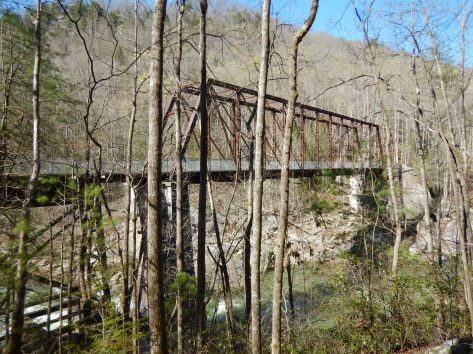 O & W Railroad Bridge (Oneida and Western Bridge) was originally built-in 1880 and moved to its current location in 1915 by the Nashville Bridge Company. It was used as a railroad bridge until 1954. The bridge is a Whipple through truss design.

We hiked the 3.1-miles out at a reasonable pace although stopping often to enjoy numerous blooming wildflowers.  Upon arrival in the Leatherwood Ford parking lot, we waited what seemed much longer than 40 minutes (or was it just that we were ready to go home) for the car shuttle then headed to Oneida for lunch.  We had a great weekend and look forward to our next event with the group in July!

Waiting for the car shuttle in the Leatherwood Ford parking lot.