Remodeling and the Arrival of Spring

It has been busy around here in a very deliberate sort of way.  Earlier this week, winter handed the baton over to spring but we hardly noticed,  the winter of 2016-2017 will be remembered as a mild one, at least by us.

We are in the middle of a remodel project on our main floor bath. Conversations about remodeling began last fall when we had plans drawn up to add a master suite, garage, storage and laundry room, some 1600 sq feet of space plus a deck (and retaining wall). We spent many nights dreaming and discussing but as we considered our age and the hit to our investments we realized an addition did not make good financial sense. Much to our contractor’s disappointment, we decided on a smaller project, a new main floor bath and linen closet.  Not as sexy as the big addition but the main floor bath serves its two masters as well as our casual guests.

And so we have begun the work in this tiny 25 sq foot space of a bath.  It has had one redo from its initial 1942 design, which was 25 years ago when John, a struggling and single father of two added tile to the shower, replaced the old linoleum with new and put in a new vanity. Flash forward to 2009 when I moved in and the walls were updated to pumpkin. Not a color I was particularly happy with but our differences on decorating are legendary (at least in this house) and John was doing the work. Besides, it didn’t look bad at the time. The cheap medicine cabinet was purchased during the repainting escapade to “hold the space” until we found the medicine cabinet we wanted. Obviously we never spent much time searching!!  After a while, one becomes blind to such issues.

After 25 days, progress is visible. We now have shiny, new (but covered up) copper pipes,  a beautiful new window and subway tile going up on the walls.  Not to be forgotten, a  thermostatically controlled heated marble floor has been installed. Estimated time of completion?   Oh, another 25 days or so…. 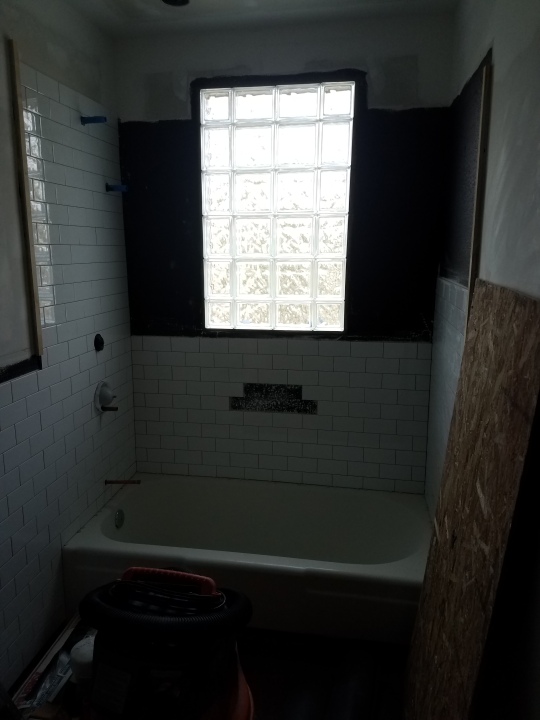 On another topic, we are heralding the arrival of spring, at least inside our house.  The streptocarpus, “Ladyslippers White Ice” below came home with me from a recent trip to a local greenhouse and has found a home near a sunny window in our living room.While the name reminds me of a throat infection, I find the flowers stunning and so far it has been a prolific bloomer.

This little geranium was also a recent addition. The color is Light Salmon and I fell in love with it from afar as I was looking for Lily of the Valley at the local greenhouse. I am considering it (and 5-6 more of the same) for a large pot in the front garden.  The flower is a double bloomer and the color is so feminine and delicate but it is hard to get away from the traditional red geranium seen in pots all over Europe.

.A couple of African Violets are blooming profusely including my favorite, the traditional deep purple.

And we often have these large lilies in a vase somewhere around the house. Often in white but sometimes pink or yellow. The fragrance is very heady and can blanket the house.  The smell often makes me sneeze but John loves it. 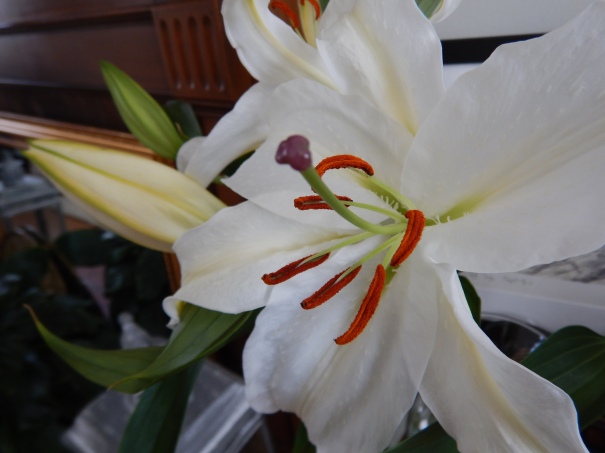 And lastly is this little guy.  Either he is confused about the season or we are.  Christmas Cactus blooms in late March-early April?